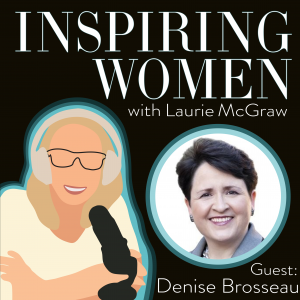 Laurie McGraw is speaking with Inspiring Woman Denise Brosseau.  Denise understands what it takes to be a thought leader, an influencer and how to build your career through experience and expertise.  Denise has spent her career as an entrepreneur and thought leader herself and she has been adamant and active in supporting women advance their own careers.  Denise shares her experience, advice including views on how to best use social media to help other women in their career journeys.

As the CEO of Thought Leadership Lab, I work with leaders and their teams to accelerate their journey from leader to thought leader. I believe that thought leadership is not marketing nor sales but instead is building a following for your ideas, thus building trust and credibility, amplifying influence and catalyzing strategic connections that lead to a seat at the table for the conversations that matter. I love to work with social entrepreneurs, start-up CEOs, heads of foundations and executives at Fortune 1000 companies. What they have in common is that they are all change agents in their field and are interested in building a platform so they can affect social, industry, community or organizational change.

In 2014, I wrote Ready to Be a Thought Leader?, (Wiley) to begin to share my ideas about why thought leadership matters and what it really takes to be a thought leader. I also lecture at Stanford Business School on topics of credibility, influence and thought leadership. I am a frequent guest author for Salesforce.com, Inc.com and the UK Daily Telegraph Business Reporter and my ideas have also appeared in Fast Company, Entrepreneur and Forbes.

Over the last twenty years, I have had the privilege of speaking before tens of thousands of people worldwide, at companies like Roche, Microsoft and Google; leadership conferences, including the California, Indiana and Arizona Governor’s Conferences and the Grace Hopper Conference for Women in Computing; and organizations like Coro and the Association of California Nurse Leaders. I have also guest lectured at Wellesley, Berkeley, Princeton, University of Winchester and MIT.

I have a commitment to developing women leaders and I have created and led women’s leadership programs for Liberty Global, Nimble Storage, Gracenote and KPMG. As part of my work, I also enjoy facilitating strategy sessions, retreats, and thought leadership development sessions. My recent clients include the Packard Foundation, Vermillion, AICCU, the California Community College Chancellor’s Office, Barstow College, Planned Parenthood, PG&E and the Women’s Startup Lab.

Over the last few years, my work has been recognized in a variety of forums. The Silicon Valley Business Journal honored me among their Top 100 Women of Influence and I was recognized as a Champion of Change by the White House and I received a Forever Green Award by the Girl Scouts. I was also recognized as one of six Women Who Have Made Their Mark by Watermark. In 2013, I received the Stanford STARS Award for my volunteer work encouraging entrepreneurship among women students at Stanford Business School.

A Wellesley graduate with a Stanford MBA, I began my career in the technology industry at companies like Motorola and Broderbund Software. In 1993, I co-founded and was CEO of the Forum for Women Entrepreneurs (FWE). I grew FWE (now Watermark) into the country’s leading organization for women-led start-ups. In 1999, I co-founded Springboard, the prestigious women’s startup launchpad that has led to over $7 billion in funding for women entrepreneurs. I also co-founded and served as President of Invent Your Future Enterprises and co-created the Invent Your Future Conference that is now in its 9th year.

community and board service

I am a member and past board member of the Northern California Chapter of the International Women’s Forum and member and past Chair of the Wellesley Business Leadership Council. I am a long-time advocate for choice. I serve as Chair of the Leadership Council of NARAL Pro-Choice America and previously served as Chair of the Advocates Board of Planned Parenthood Mar Monte and as a Board Member of 416 Holdings, a for profit company formed to increase the financial self-sufficiency of Planned Parenthood affiliates. I also serve on the advisory board of several start-ups including Kokko, Inc., The GUILD and Aspira Women’s Health and as an advisor to Watermark, Invent Your Future Enterprises and Springboard.