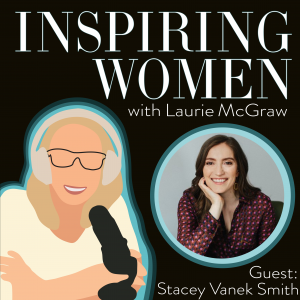 Laurie McGraw is speaking with Inspiring Woman Stacey Vanek Smith, acclaimed business and economics correspondent for NPR and author of Machiavelli for Women: Defend Your Worth, Grow Your Ambition and Win the Workplace.  Stacey recognizes that we are in a powerful moment right now with a convergence of forces that has the potential to be very good for women.  She turns to the unlikely hero of Machiavelli to write this women’s power playbook recognizing the clarity that comes when you remove the emotion of gender disparity issues.  Women may make 15% less in certain areas, and while that’s wrong, that also means there is 15% more on the table somewhere, now how do I go get it?  Stacey tackles tough and relatable issues with precise guidance from 500 years ago.  The combination of humor, wit, and personal stories tied to history lessons makes Machiavelli for Women one of the best business books I have read in quite some time and the top gift for my daughter this coming holiday!

Author, Machiavelli for Women: Defend Your Worth, Grow Your Ambition and Win the Workplace

Stacey Vanek Smith is the co-host of NPR’s The Indicator from Planet Money. She’s also a correspondent for Planet Money, where she covers business and economics. In this role, Smith has followed economic stories down the muddy back roads of Oklahoma to buy 100 barrels of oil; she’s traveled to Pune, India, to track down the man who pitched the country’s dramatic currency devaluation to the prime minister; and she’s spoken with a North Korean woman who made a small fortune smuggling artificial sweetener in from China.

Prior to coming to NPR, Smith worked for Marketplace, where she was a correspondent and fill-in host. While there, Smith was part of a collaboration with The New York Times, where she explored the relationship between money and marriage. She was also part of Marketplace‘s live shows, where she produced a series of pieces on getting her data mined.

Smith is a native of Idaho and grew up working on her parents’ cattle ranch. She is a graduate of Princeton University, where she earned a bachelor’s degree in comparative literature and creative writing. She also holds a master’s in broadcast journalism from Columbia University.