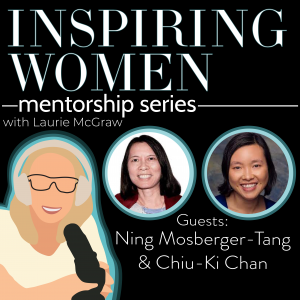 Laurie McGraw is speaking with Inspiring Women NING MOSBERGER-TANG and CHIU-KI CHAN in this Mentoring Series episode.  Ning and Chiu-Ki have a number of things in common.  Both began their careers as developers at Google, in fact, Ning was the first female developer there.  Both relocated from the west coast to Boulder, CO.  Both self describe as introverts and have passion, interest and feel obligation that they should be making the world better.  This means addressing climate change, saving democracy….the major issues of our time.  As Chiu-Ki took action to learn how to get involved – she connected with the local political party office.  What she learned didn’t make sense to her where politicians need to spend so much of their energy working on being re-elected v putting energy towards solving these major issues.  Ning had started a movement – the Blue Wave Postcard Movement specifically.  An all women organizations focused on community and taking action in ways that DOES have impact, DOES achieve results.  Chiu-Ki joined not because it was all women, but found that certainly helped.  She appreciates the respectful environment and not having to interrupt to be heard, a practice that was important to learn in Silicon Valley as a woman developer, but never felt good or right to Chiu-Ki.  Ning asks ALL people to consider getting involved, just start doing something, and to literally start today.

Ning has a background in computer science and has worked for a number of years in the tech industry, including a few years as a technical lead in Google during its early years. Since 2006, she has focused on conservation and environmental education, climate change mitigation, community organizing, and policy advocacy. She does her work through a private foundation, a social welfare non-profit, and as a private investor in cleantech startups. She also serves on multiple environmental boards including the board of League of Conservation Voters. Ning received her B.S. in Computer Science and Engineering from Tsinghua University and M.S. in Computer Science from the University of Arizona.

Chiu-Ki is an Android developer with a passion in speaking and teaching. She runs her own mobile development company, producing delightful apps such as “Monkey Write” for learning Chinese writing and ‘Heart Collage’ for snapping photos to stitch into a heart. When she is not writing apps, she can be found travelling the world, sometimes sightseeing, sometimes dispensing Android tips on stage at various tech conferences.