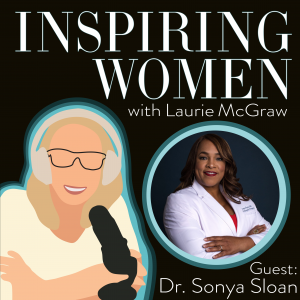 Laurie McGraw is speaking with Inspiring Woman Dr. Sonya Sloan, an orthopedic surgeon, supermom, a woman of faith, an athlete, health equity disruptor, author, educator.  Her life’s work has been centered on paying it forward.  Incredible conversation and you will be inspired hearing about Dr. Sloan’s journey, passions, and pursuit of impact.  Can women have it all?  Dr. Sloan says Yes!

Journey notes from this episode include:

Sonya M. Sloan, M.D., aka #OrthoDoc, has established herself as a force to be reckoned with in the male-dominated field of Orthopedic Surgery. Licensed to practice medicine in several states, she travels the country to extend the impact of her unique approach to patient care. With a B.S. in Chemistry from Texas Tech University and an M.D. from the University of Texas Medical Branch (UTMB), Dr. Sloan completed her residency at Baylor College of Medicine where she made history as both the first African-American female Intern in General Surgery and the first African-American female Orthopedic Surgery resident. She has authored and published research projects in Orthopedic Surgery and a joint venture with NASA, Johnson Space Center.