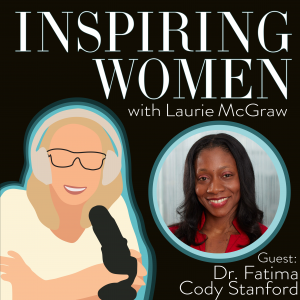 Laurie McGraw is speaking with Inspiring Woman Dr. Fatima Cody Stanford.  Speaking with Dr. Stanford is a lesson in humility.  If you don’t have nine degrees to your name, do ~150 lectures per year, actively mentor >50 students, conduct research in both a genetic and epigenetic fashion while simultaneously caring for patients ages 2 – 90 years old in a field you actually helped to create, obesity medicine….  When asked about her drive, Dr. Stanford laughs it off a bit and talks about being driven since she was in a spelling bee at 4 years of age, that’s right, four years old.

Some combination of faith, family and fitness (kick boxing is her jam) are her go to’s for inspiration, focus, impact and the strength reserves required to serve her purpose.  This includes health equity and ensuring that weight bias and stigma, or just being black are not in fact obstacles to health or access or humanity.

Dr. Stanford is less optimistic that change will just come.  She appreciates the efforts of education and new *Chief title* everything equity post the murder of George Floyd.  She believes requirements versus energy is needed for sustained change so that black women in particular do not need to shoulder the majority of the burden of DEI efforts without the requisite resources and commitment from others who can “turn it off” while she and others cannot.

Closing advice for younger women.  Listen to yourself.  Understand what is unique about you and use that to forge your path.

Dr. Stanford is an obesity medicine physician scientist at Massachusetts General Hospital (MGH)/ Harvard Medical School (HMS). Dr. Stanford received her BS and MPH from Emory University as a MLK Scholar, her MD from the Medical College of Georgia School of Medicine as a Stoney Scholar, and her MPA from the Harvard Kennedy School of Government as a Zuckerman Fellow in the Harvard Center for Public Leadership. She completed her Obesity Medicine & Nutrition Fellowship at MGH/HMS after completing her internal medicine and pediatrics residency at the University of South Carolina. She has served as a health communications fellow at the Centers for Disease Control and Prevention and as a behavioral sciences intern at the American Cancer Society. Upon completion of her MPH, she received the Gold Congressional Award, the highest honor that Congress bestows upon America’s youth. Dr. Stanford has completed a medicine and media internship at the Discovery Channel.