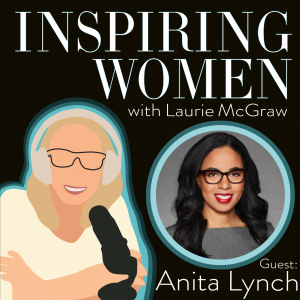 Laurie McGraw is speaking with Inspiring Woman Anita Lynch about changing company cultures and having that sense of belonging even when you are one of few, or only, in leadership.

Anita’s love for data, technology, and leadership started early.  She demonstrated executive presence “on the playground” and learned to code at age ten when her father brought home a TRS-80.  Beyond her parents, she had other early role models.  The first black person CEO she ever knew was in fact her Aunt Caroline.

Over the years while assuming greater and greater leadership responsibilities, she did not ignore the reality that she was one of few, or often times only in these positions as a data/technology executive.  She had learned to transcend by finding ways to connect with others as peers.  If you are at the table, you are peers, so Anita advises to be aware and not try to fight the differences but to seek opportunities to connect with your peer colleagues.

Learning how to drive culture change in large scale organizations also comes through learned experience from launching significant digital and data initiatives at Yahoo, Amazon and Disney.  Leading company tectonic shifts of collecting, aggregating and then activating data also afforded her the opportunity to work with and learn from other inspiring executives.

Anita advises that inclusive cultures start by making people feel like they belong.  This means recognizing and celebrating differences and starts with ensuring employees feel safe and cherished.  You cannot feel cherished without feeling safe. Anita describes tactics for how to allow for those differences, whether it is age, gender, race or other.

Anita’s closing advice to women is that we are a community and need to be supportive of each other.  Significant career decisions can be broken into a series of smaller decisions so that in fact women optimize their careers over time and in fact have it all!

Anita Lynch is dedicated to making life better and business more resilient through technology and data. Her expertise includes implementing digital transformation, finding positive solutions that benefit all stakeholders to mitigate risk, and increases shareholder value. A technophile at heart with an intuitive sense of systems and processes, she has an innate ability to bridge technology and business with diverse perspectives. She identifies smart investments that protect and leverage data to maximize profitability, and ultimately adds value to corporations at all stages.

Ms. Lynch most recently served as Chief Data Officer at New Relic (NASDAQ: NEWR), a provider of data-driven enterprise software. She is among the first African American women to serve in the c-suite in this role for a public company.

Anita Lynch has been recognized for trailblazing and leadership. In 2022, she received a Culture Shift Award for Technology, Innovation and Social Impact in Silicon Valley. In 2020, she was named in the San Francisco Business Times ‘Top 100 Most Influential Women in Business’ and a featured keynote speaker in Snowflake’s 2020 Data Cloud Summit. Ms. Lynch has been recognized as an innovator and technology inventor with patents for her work on trading systems at the Chicago Board of Trade in 2004.